Or: relationship status: it’s complicated. Like the husband said: You don’t want to post something like that, it’s like putting your relationship status on it’s complicated on facebook and who does that?
But let’s start at the beginning: We were lucky enough to be parked at the midwife for the pre-birth, post-birth time. And we were lucky enough to score a shady place, because south Florida. We were not so lucky with the little storm and the something that hit our roof. The skylight was fixed before we bought Betty, professionally coated with fiberglass. Not. And we had this nagging feeling, that something was actually broke. And we ignored it successfully for a month.
Then a good friend invited us to watch her house (well and the driveway, no place like home) while they were gone. The chance to check on the roof and to make sure that of course, everything is perfectly fine. Except it wasn’t. And that’s when it started to get complicated. Half of the roof in the bathroom was infested with mold and spongy: 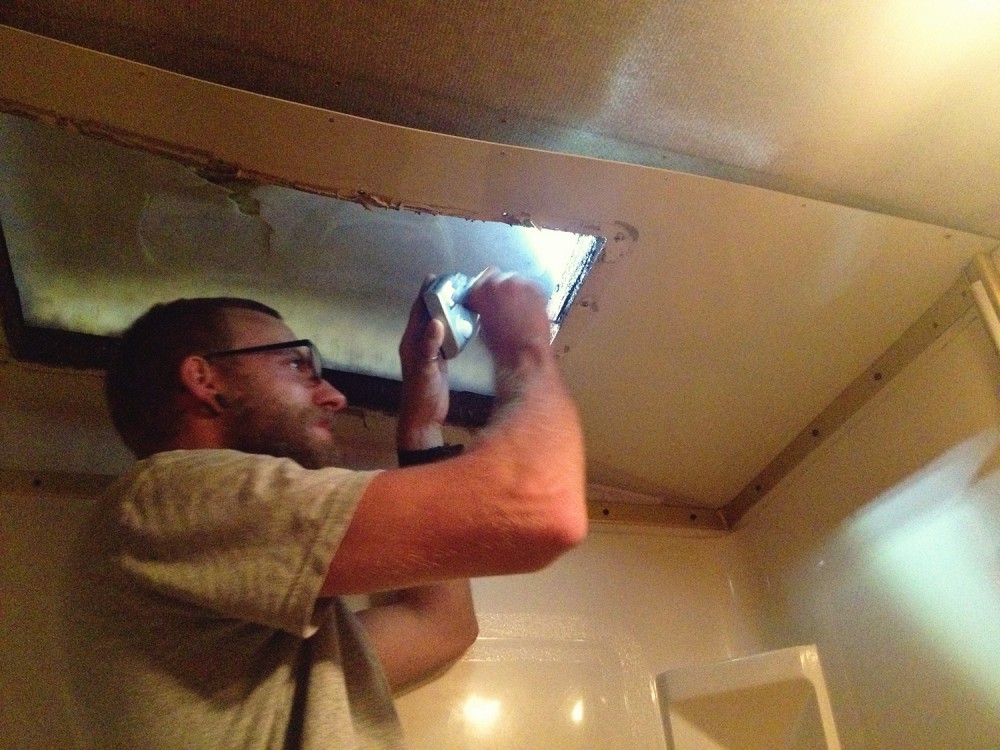 At this point we weren’t quite sure yet if the fiberglas has to be removed. It has to. 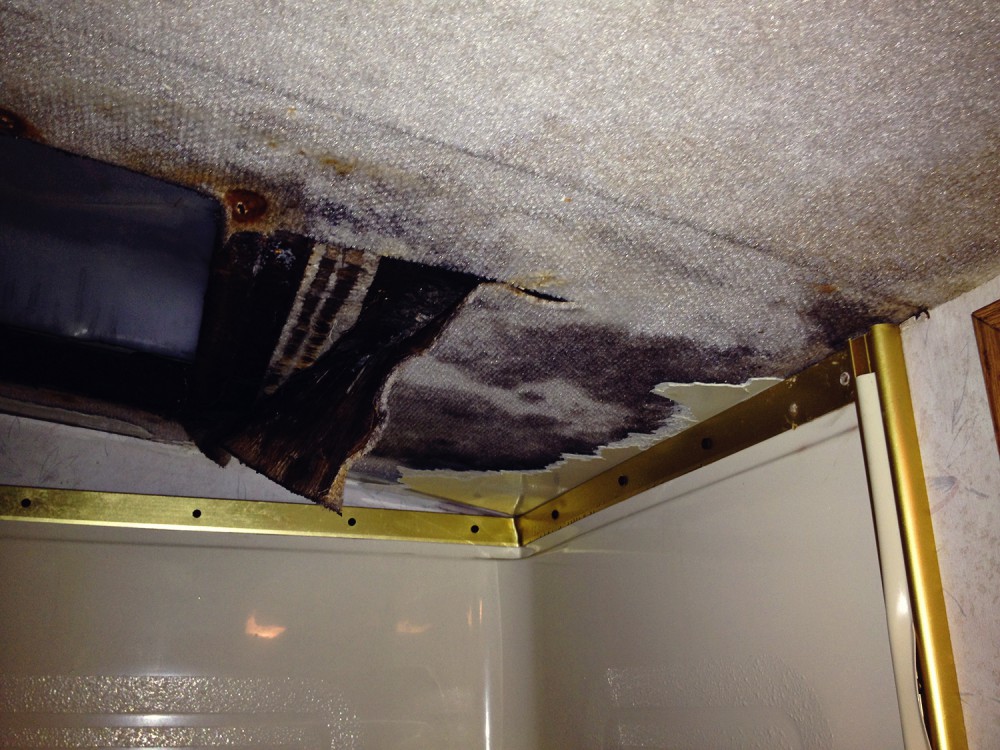 In general, a motorhome roof consists of rubber roof on the outside, plywood, Styrofoam, plywood and – why on earth?! – carpet. The carpet and the lower plywood were basically gone. The upper plywood was, too, to some extent. Means: we need a new, leakproof skylight. The unsusual long dry stretch was about to end. First step: Get an actual skylight. But where? I started calling people.
The original windows where overpriced, the others needed weeks for delivery and we weren’t even sure they fit the curved roof. What are we supposed to do? We’ll do it ourselves. The material could be bought at Lowes, tape so seal everything (Eternabond) was sold at a small roofing store in town. And who cares that the window does not have a dome? That’s right, nobody does. The whole buying and building process took one day and the last steps where performed in the dark with lightning not too far away. But the first Florida rainshowers show: Everythings tight, nothing leaks. 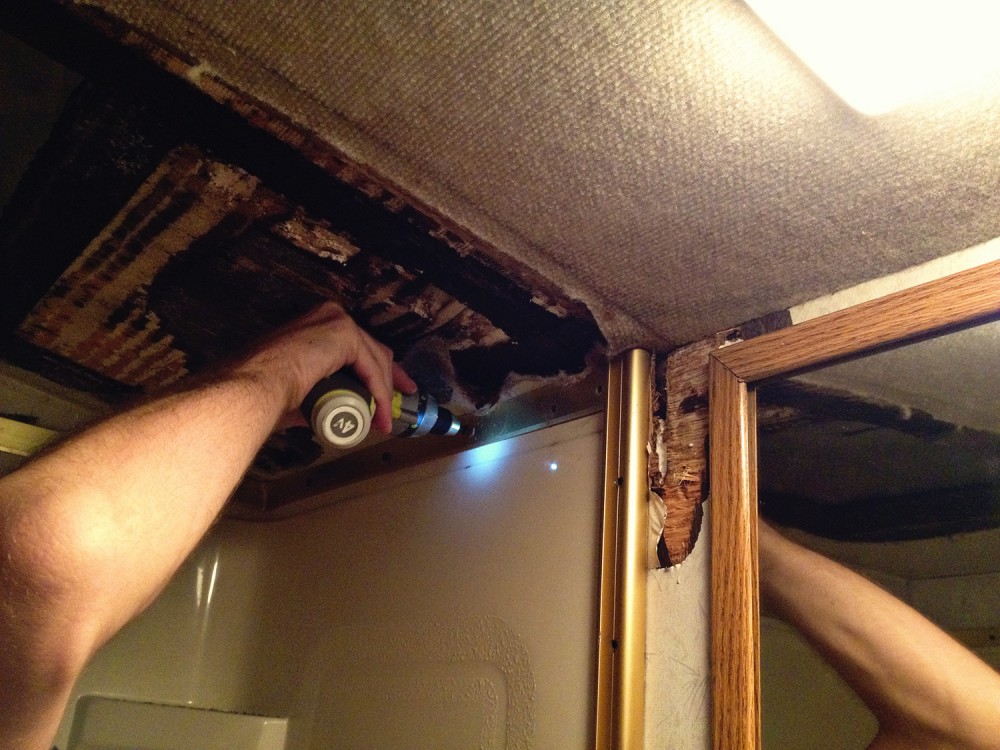 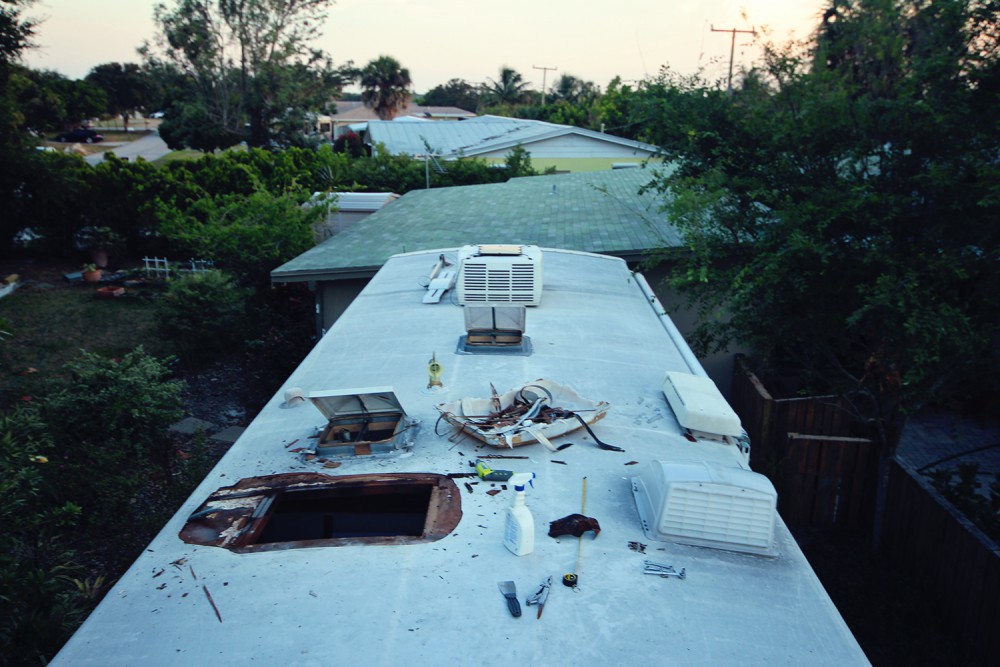 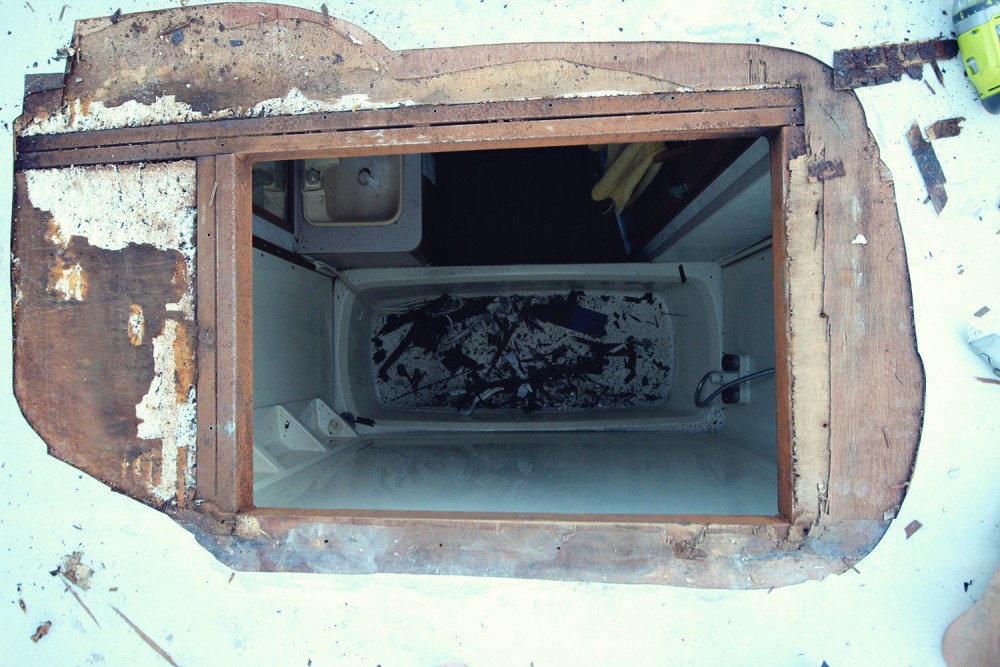 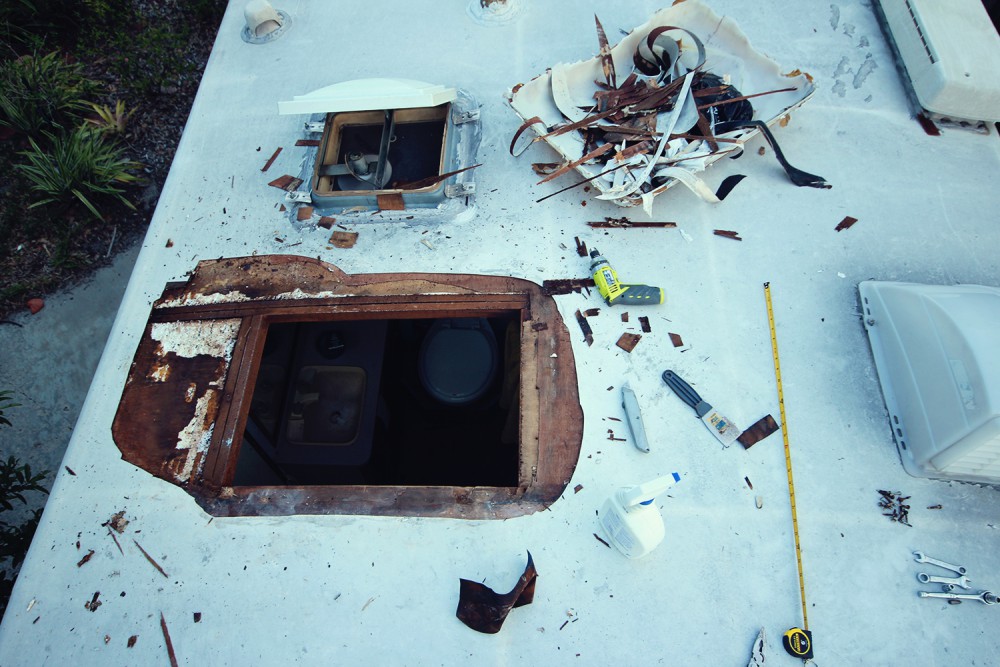 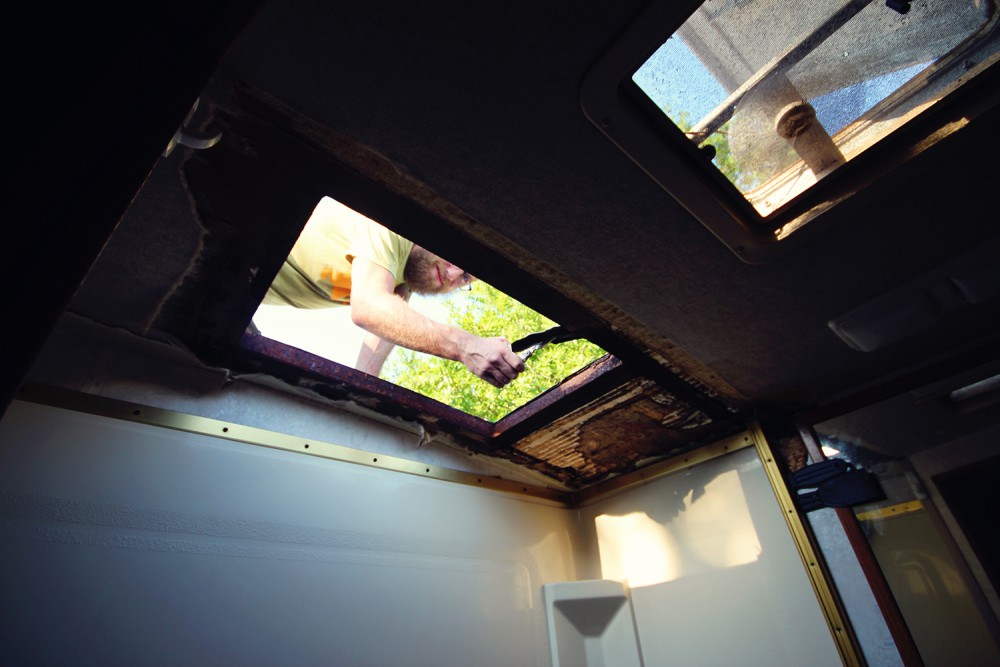 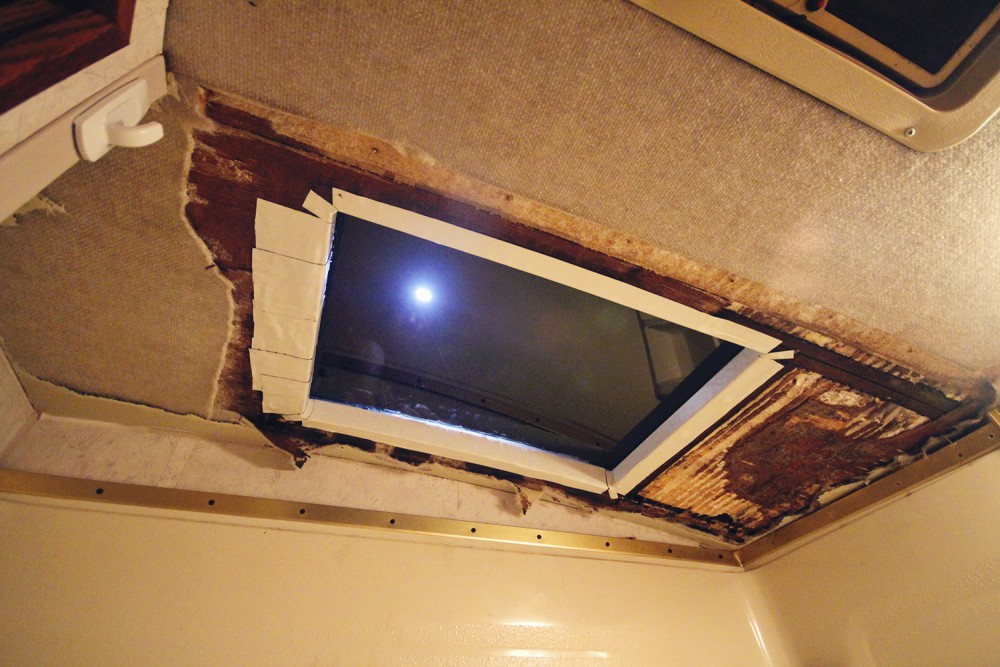 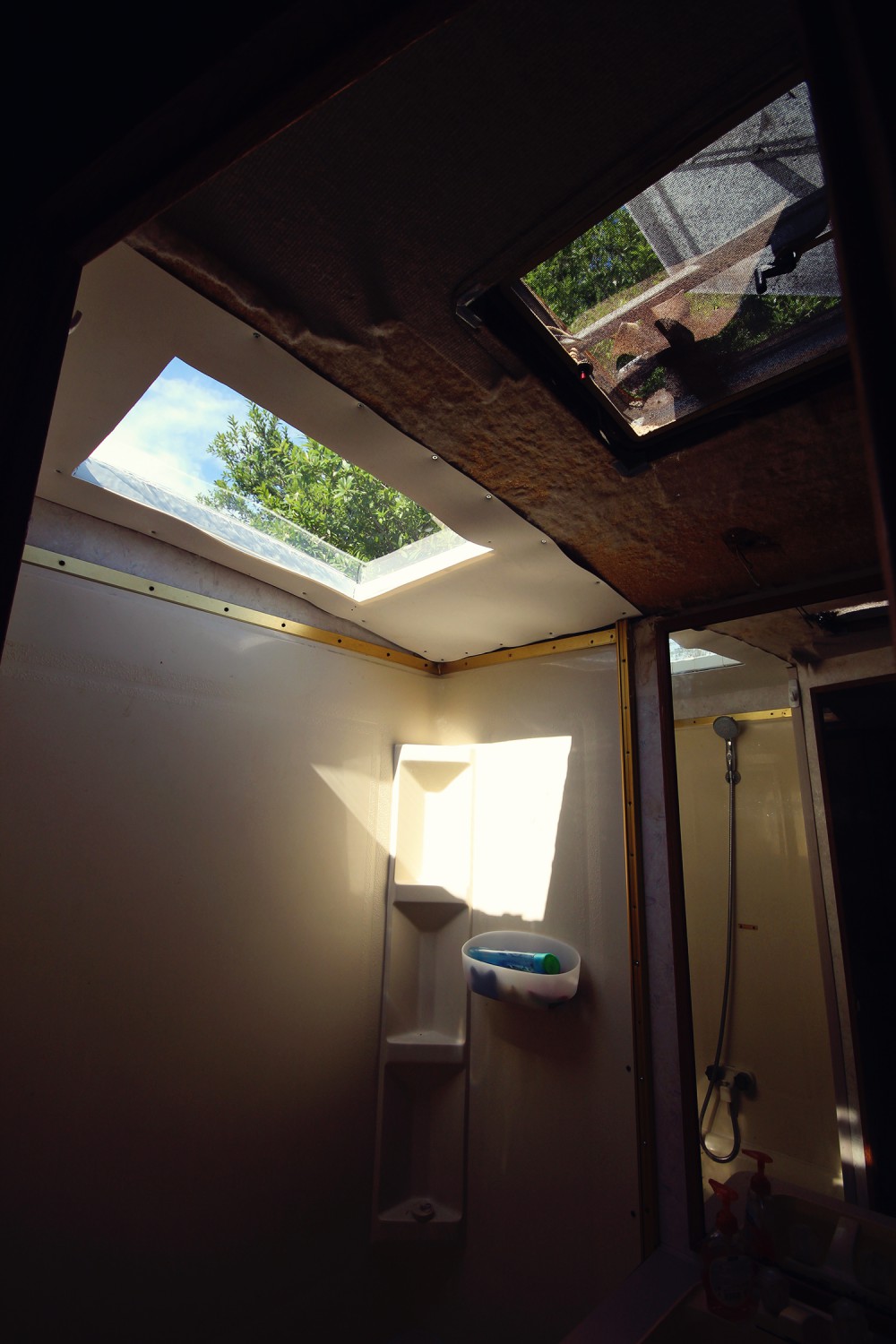 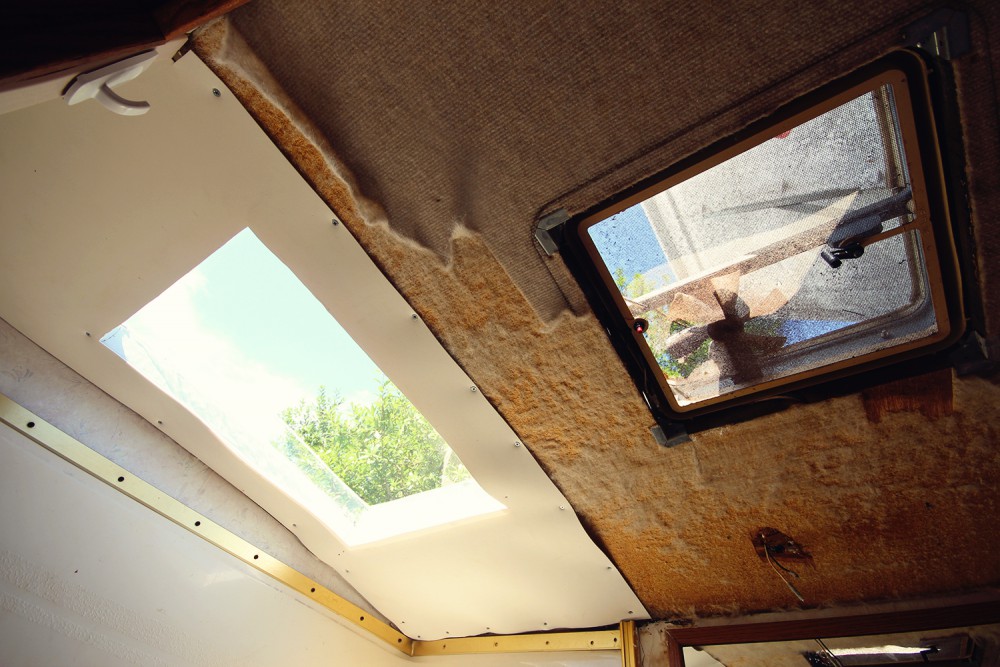 Which doesn’t mean that we were finished. The bathroom was sealed, but it looked like a hurricane just went through. We had to attach a new ceiling ( liquid nails works as good as no nails), the walls had to be plastered, and we had to use this perfect excuse to get rid of this awful awful flower wallpaper (which is, by the way, still lingering in the bedroom, waiting to be eliminated). And well, while you’re at it you could paint the cabinets as well. Just saying.
Now we only need to finish the molding at the window and we’re finished. Well, someone has to actually measure and cut and screw it on the damn ceiling.
But seriously: Carpet.on.the.ceiling? Glued on plywood? Worst idea ever. 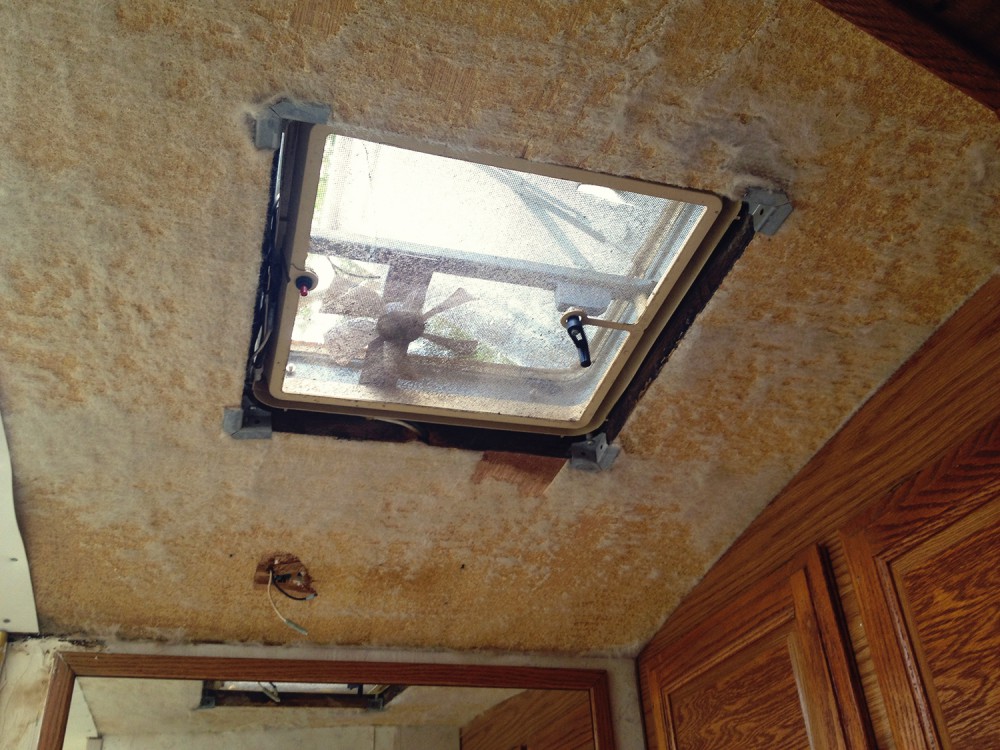 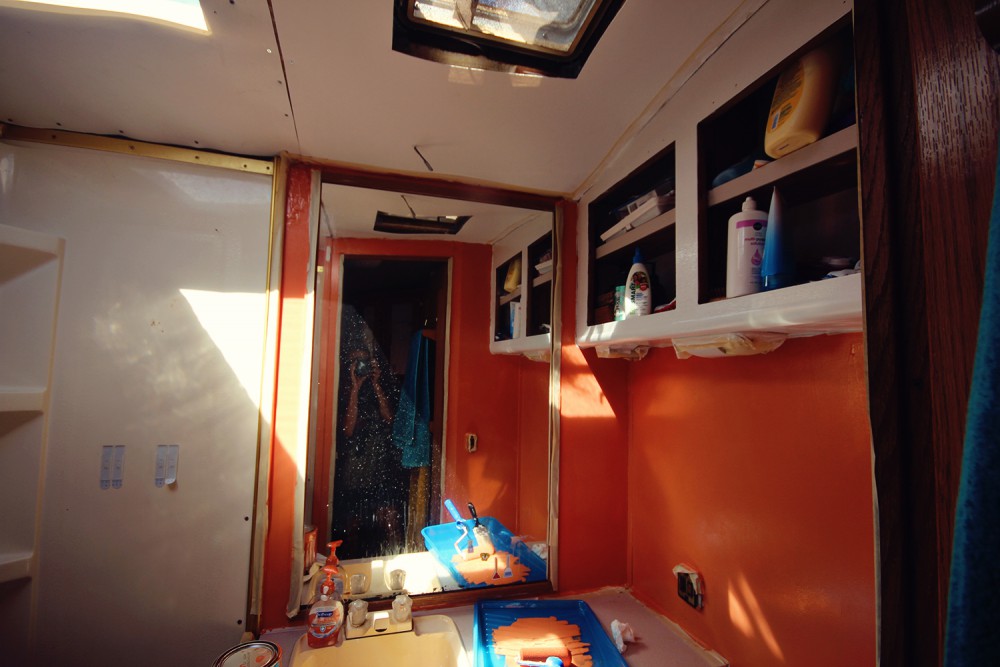 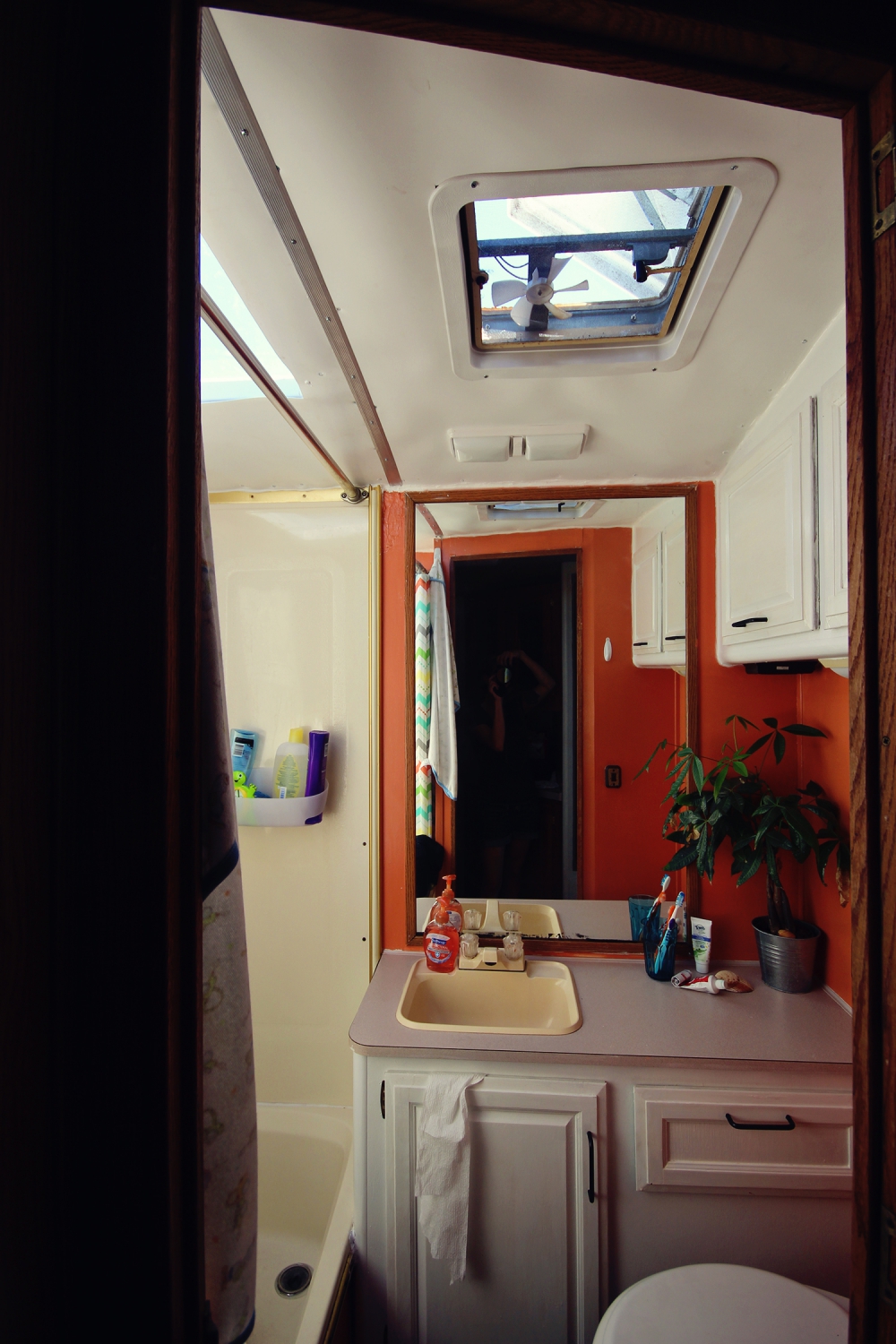 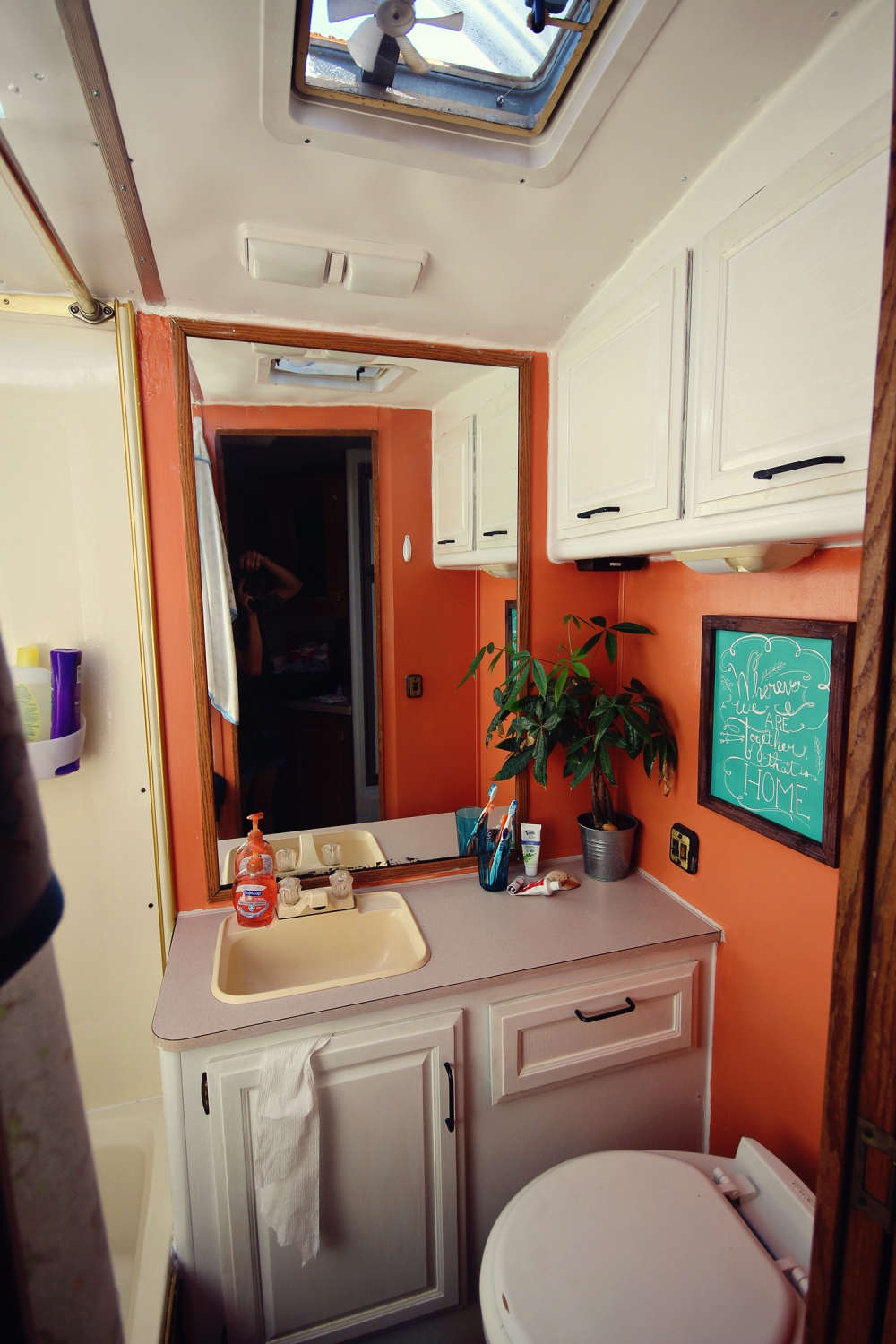 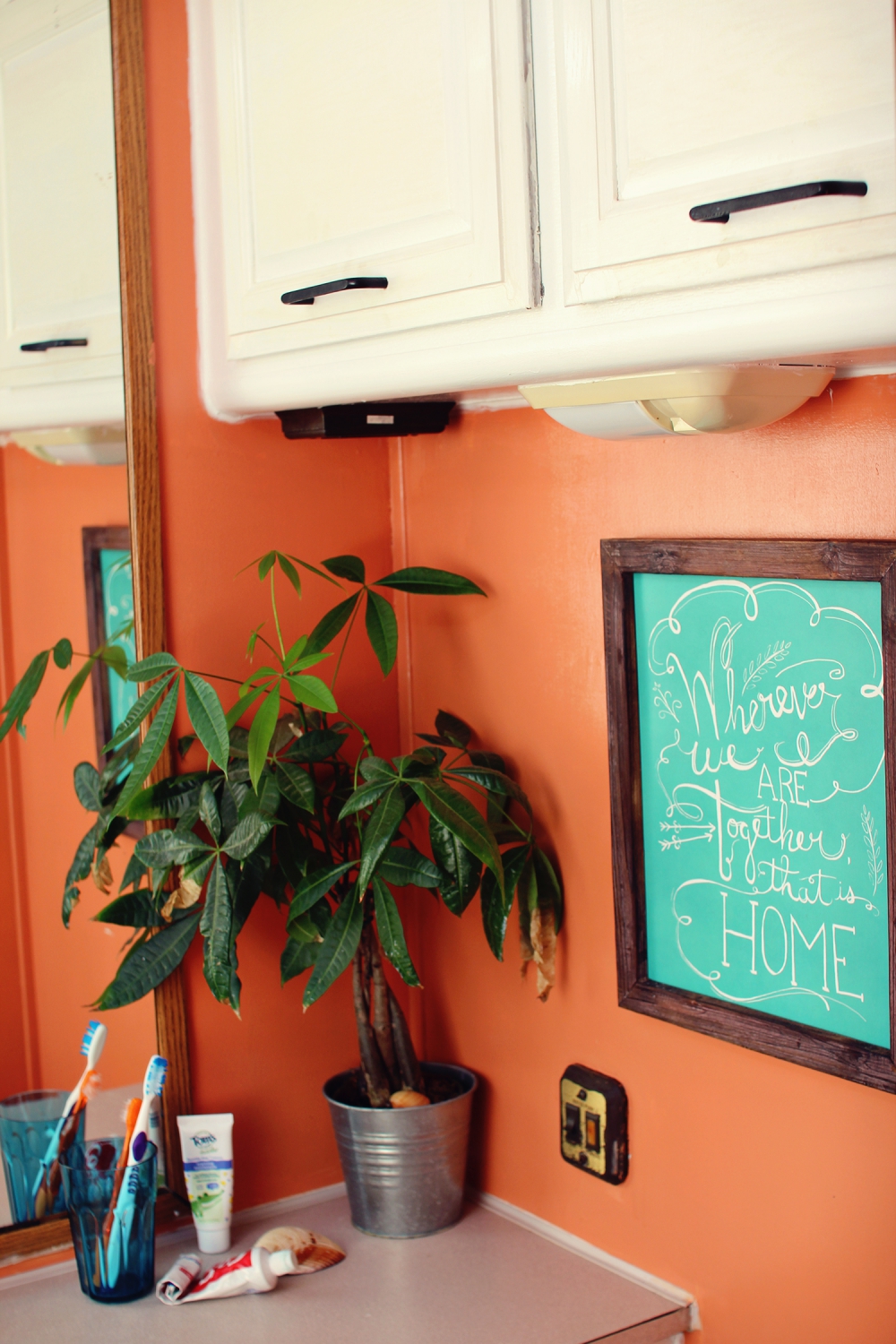 So that was problem number one. Detected, resolved. Next chapter.