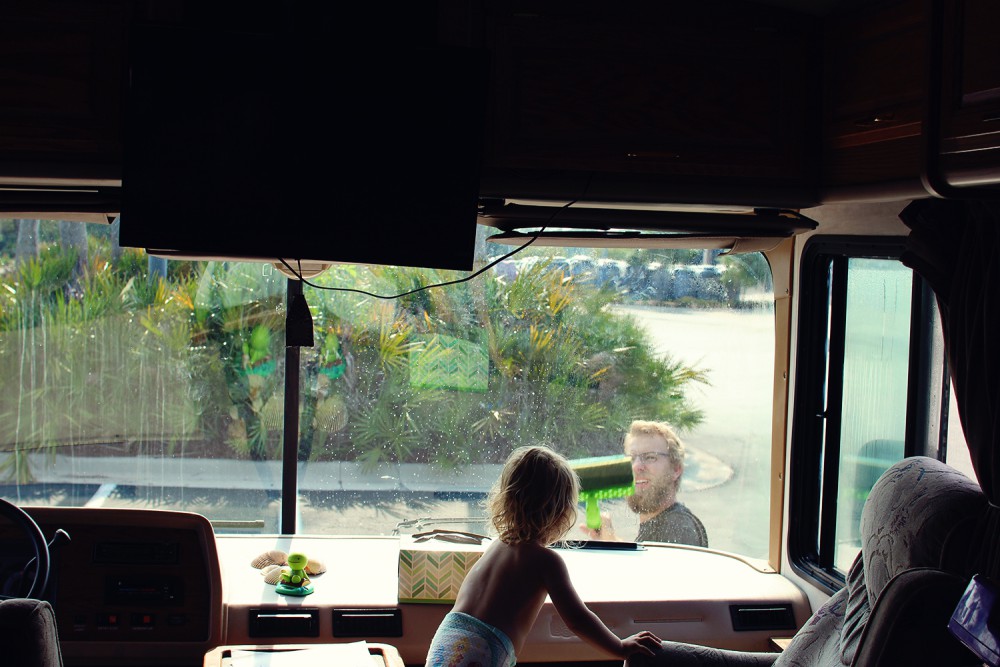 A common side effect of being pregnant, besides looking like a Manatee, casual grunting when getting up and the need to sleep for 24 hours a day, is nesting instinct.
That wasn’t too bad when we were still living in our apartment. Oh, I could clean the oven. Should we move the sofa? But now, living in a 20-year old motorhome we just bought, with cushions looking like the queen donated, it may escalate.
And it took all my willpower to not head to Lowes, get this paint already and paint all the cabinets. Well, fumes and stuff. But for anything else they got those nice electric shopping carts. I only felt a little bit sappy, driving backwards while beeping. 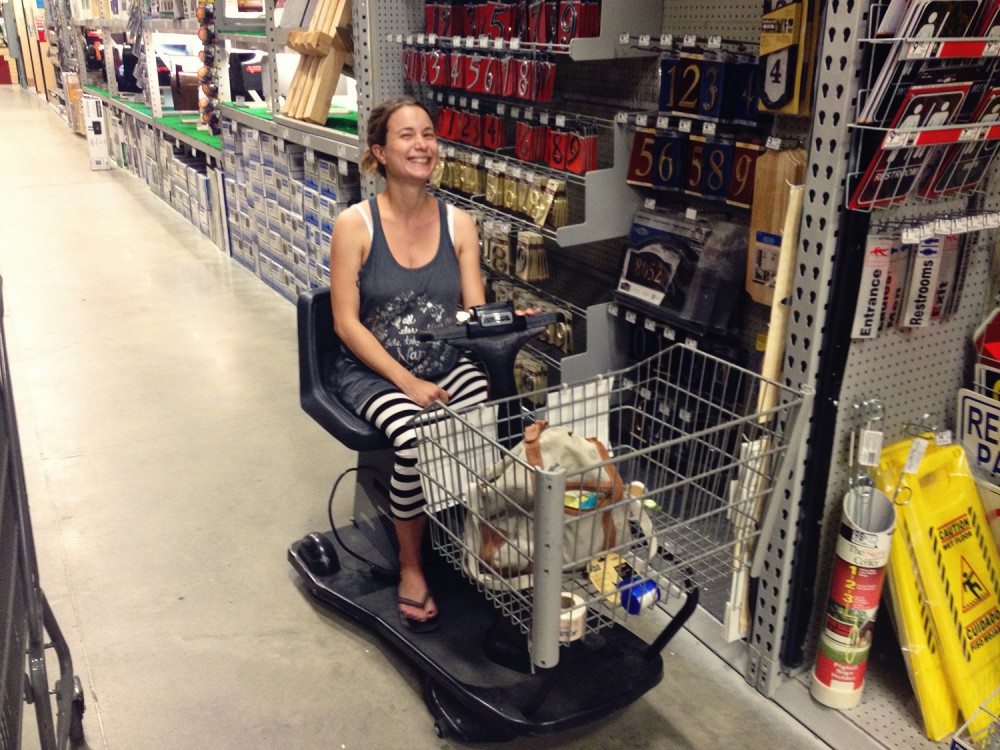 Anyways, we could – I was allowed to – do this:
Sofa/Dinette
That was like a bad joke on my to-do list. Ya sure, pregnant lady without a sewing machine and or money. You really think you gonna escape this flowery-beige-pattern anytime soon?
I did it!
We bought the fabric in February, good old Indira from IKEA. Believe it or not, I got upholstery needle and thread from Walmart and a day the baby decided not to explore this neat little spot right under my ribs. So now the dinette and the couch kinda have new covers. Well, except for the sides of the dinette. That’s for another day, I won’t even write that on my to-do-list yet (though, this is exactly the place the kid prove that her completely-100%-washable crayons cannot be washed out. The same for the black streak on the bathroom door. Looks like someone tried some wall-running with new sneakers.). 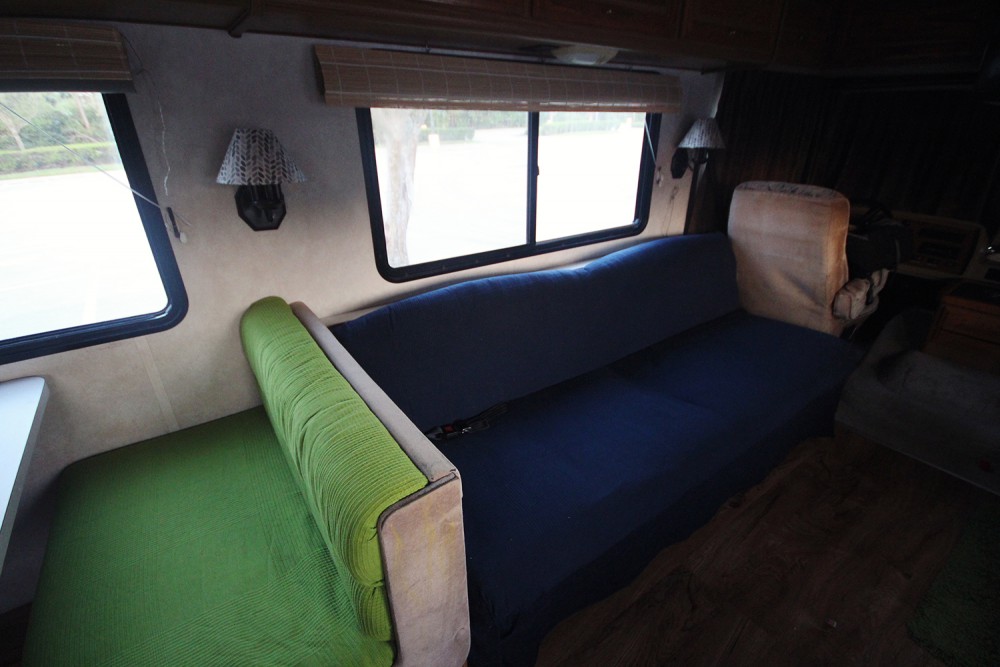 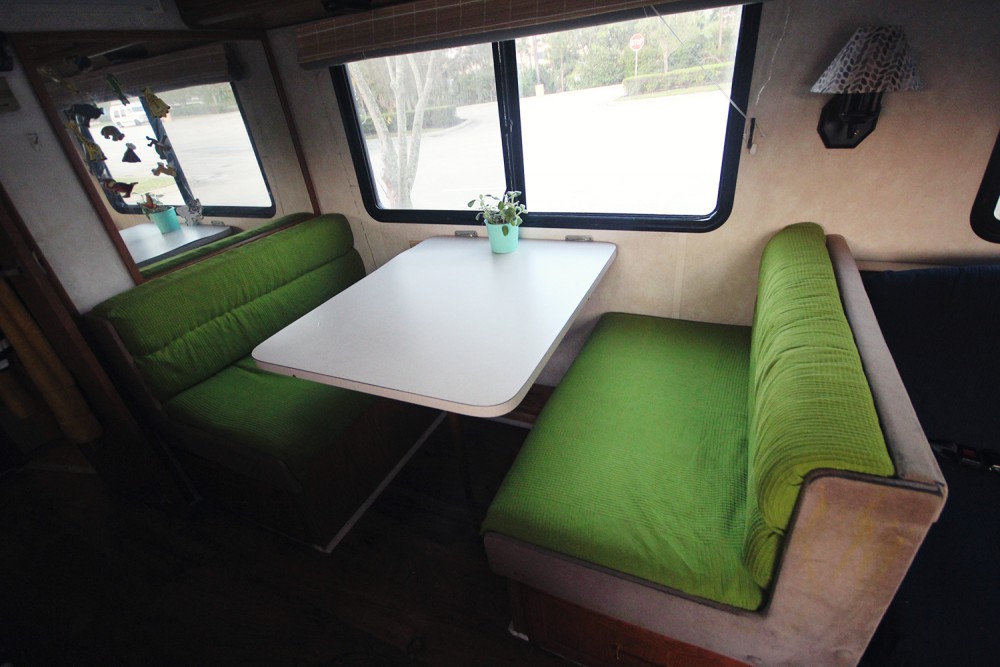 The Co-Sleeper
That project was wicked. There was always something that went wrong. Wrong screws. Wrong angle brackets. No power for the cordless screwdriver and the house batteries are too low for charging. The kid reduces naptime to 30 minutes instead of 2 hours we planned with. And how are we supposed to fix the fabric around it?!
Anyways, we did it. And it feels so good, it feels like we’re finally ready for this baby. Even though I normally wouldn’t mind sharing the bed with the little one. Especially if he won’t sleep like an helicopter (as some other kids in this family tend to do). But it’s just too hot! And while the generator is fixed right now (fingers crossed the glue holds better this time), we won’t let the AC run all night. We’ll probably get pneumonia. That’s why he’ll sleep in the co-sleeper, without additional body heat from us. I don’t really want to think about four people sharing the bedroom in July in Florida, but that’s something we deal with when we have to deal with it. Until then: Windows open, fan on and keep looking for 12V solutions. 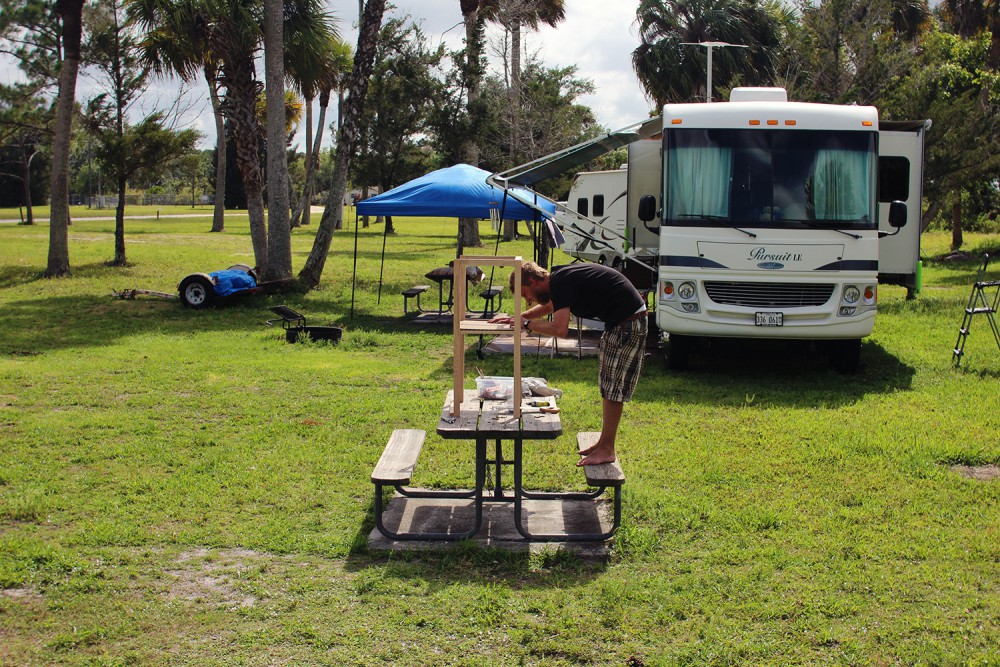 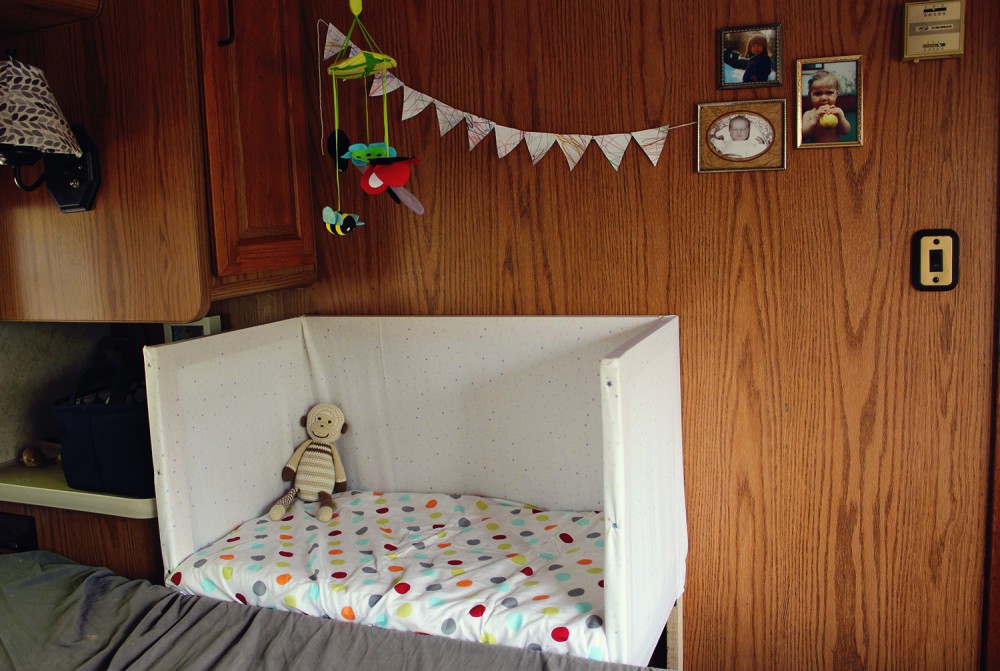 The starter
Ah well, the starter. The never ending story. That may have been cleared after all. Fingers crossed.
Let’s take a moment to remember the first time we had to call the wreckers 4 months ago. Gas station, Betty didn’t give as much as a click when we tried to start. Diagnosis from all the bystanders (more or less professional): the starter. So we got towed to the nearest repair shop, that was closed by the time we got there. And the next morning Betty started as if nothing was ever wrong with her.
Everything was ok until about 2 months ago. That’s when she started to be unreliable. Sometimes she would start just fine, other times it took several attempts. It helped to talk to her, beg her. Until it didn’t. Once we had to call roadside assistance because all the attempts drained the battery. “We” cleaned all the battery contacts, cleaned the ground contacts (which left us with a short circuit and sparks at the gas station. Several times. Yay for fastening the screws. Not.). We bought a new main battery (which apparently wasn’t the issue but it didn’t really harm us, either). Then we were back at the gas station. Click. So many times click. After 30 minutes talking to her, cursing her, wiggleing, checking connections we called roadside assistance. Again. 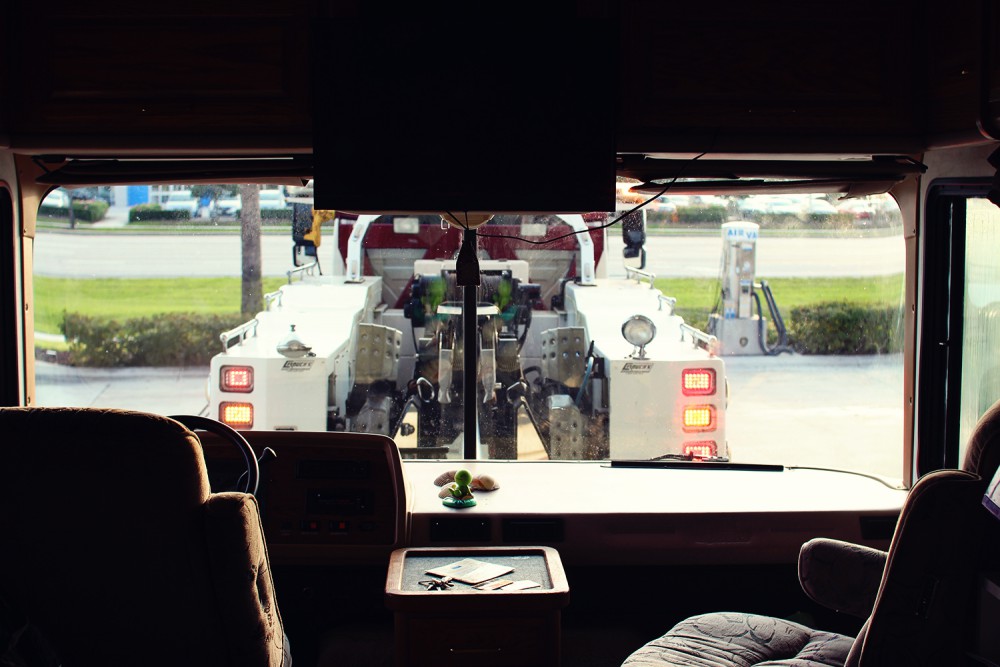 We opted for being towed to Walmart right next to the gas station instead of a repair shop. We didn’t have money for repairs anyways and we kinda expected everything to play along like last time.
But – oh horror – nothing other than click the next morning. We bought a Voltmeter. And we had no clue what to do with it. We tried to check every connection. Until the voltmeter died after the second measurement.
Anyways, we were lucky – again (seriously, I don’t understand how two, three, four people can be so lucky all the time.) – and the nice guy in the RV next to us came over for a chat. Apparently he was bored. As a retired electrical mechanic working with trucks. Somehow, the right people always find us. And not only did he offer help, he had half the equipment of a mechanic shop with him. Including working voltmeter, 20t lifting jack, and hydraulic air pump to finally fill up the tires.
The part of the family who still fits under the RV (hint: I occupied myself with playdo) managed to find the loose cable connection, with several drawings and explanations. And now Betty starts as if she was a Teenager. Let’s hope the fix is permanently!
Where is papa? 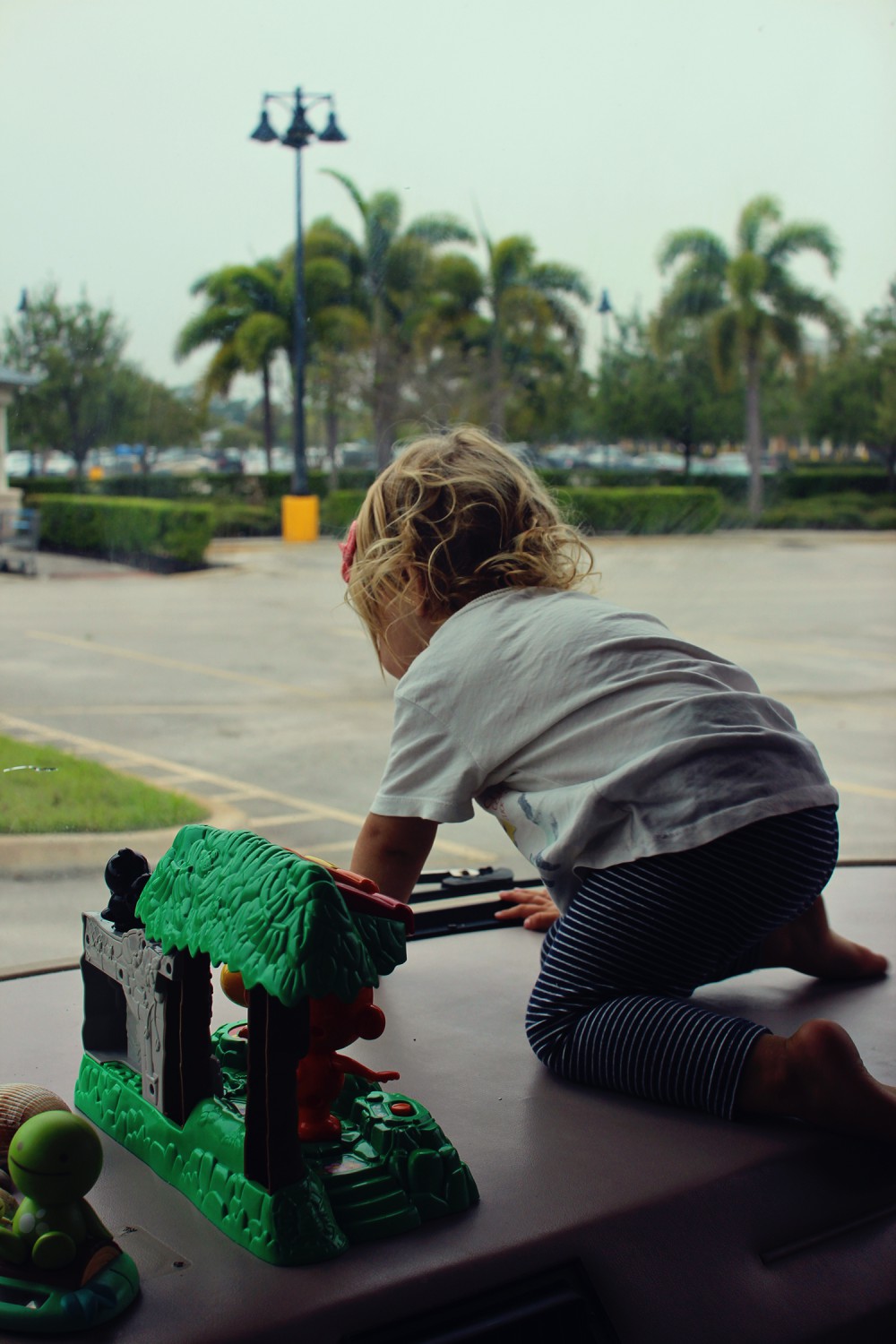 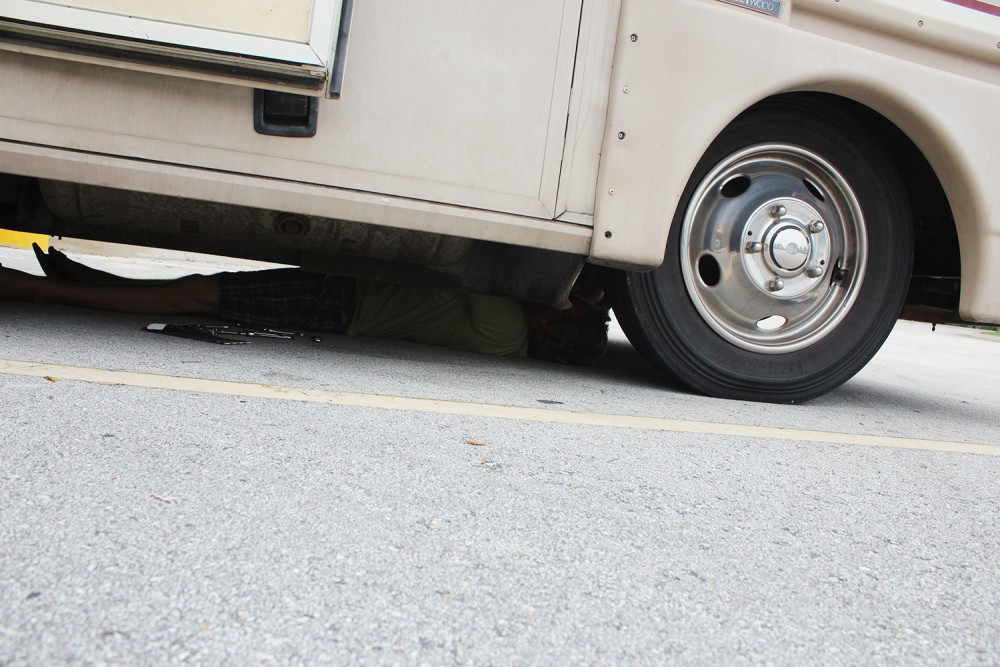